We all know that in every household there has to be “rules”- like replacing the loo rolls, putting the lid on the toothpaste, hanging towels back up – these, incidentally, are Jeff`s “rules” which no-one takes any notice of 🙂 Mine, however, are a whole different ball game, and god forbid if you mess with my rules 🙂

Both Jeff and I work bloody hard, full-time, so we do share a lot of the household jobs – he`s in charge of keeping the toilet seat warm on his return from work and then progresses to chief sofa warmer during an evening 🙂 The lion`s share of the cleaning, looking after the girls, organising school uniforms, washing and ironing etc., is my domain – you may have noticed I missed out cooking – I do that too – but quite badly, I’m very lucky that Jeff is so grateful to have something/anything cooked for him he never complains and eats everything put in front of him – on his warming sofa, of course 🙂

Listening to him this morning, hunting for clean pants and socks reminded me of a few years ago when he broke one of my “rules” Ha!

One major rule of the household is that Jeff HAS to put petrol in the car for me.  I can and have done it but I have a complete phobia about it – I don’t know why, I’m always worried which side the tank is on, always get it wrong, always go over what I intended to put in there, worried my bank card will be rejected and I`ve effectively “stolen” petrol with no means to pay – all irrational but it`s not “my thing”.  So that is top of Jeff`s jobs to do.  One night I was about to leave to a nightshift, I said the usual “is there petrol in the car?” “there should be” Jeff replied!!!!  WHAT DO YOU MEAN – THERE SHOULD BE!!!! ARRRRRHHHHH!

This resulted in me having a meltdown listing off all the possible scenerios that could happen if I ran out of petrol.  Off I stropped to work – incidentally, there was more than enough to get me there – but – not the point folks, not the fucking point 🙂

The next morning I returned and whilst he was in the shower, I removed his drawer containing all his pants and socks and hid them 🙂

Out of the shower he came to get dressed …………… He wasn’t impressed and was putting on a fine show of dancing around butt naked telling me he would late for work bla bla bla.  I stood there chuckling and informed him that if he didn’t supply me with petrol, I wouldn`t supply him with clean pants and socks 🙂 🙂 He eventually found his drawer, hidden in the boys room and he`s been pretty good about the petrol situation since then 🙂

I introduced him to an old friend of mine recently, she said “Commiserations Jeff” on being married to me – how rude!!! 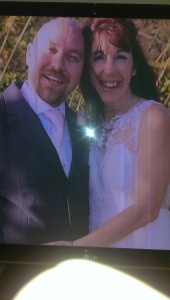